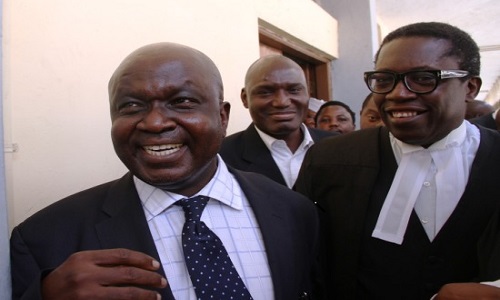 Embattled Senior Advocate of Nigeria (SAN), Rickey Tarfa, who is currently in a legal battle with the Economic and Financial Crimes Commission, EFCC, has denied bribing a judge of the Federal High Court, Justice Hyeladzira Ajiya Nganjiwa, with N5.3million.

The senior lawyer said he read about the allegation in the media and has not been served with a fresh charge.

Explaining his relationship with the judge, Tarfa said before being appointed to the Bench, Justice Nganjiwa was absorbed into his firm in 1995 immediately after leaving the National Drug Law Enforcement Agency (NDLEA) where he rose to the position of Deputy Director (Prosecution).

He said Nganjiwa was with his law firm until he was appointed to the Federal High Court in 2012.

Speaking through his Head of Chamber, Mr. John Odubela, the senior lawyer said Nganjiwa, who specialized in criminal law, attracted many briefs/clients because of his expertise.

Tarfa said upon his appointment as a judge, the law firm continued with the cases he brought to the chambers.

“In the light of the above, we have continued to discharge the firm’s financial obligations to him in respect of cases he has handled for the firm as a practicing legal practitioner in our law firm and those he brought to the chambers”, the statement said.

Tarfa accused the EFCC of persecution, describing the 27 count charges filed against him as ridiculous.

“We have cause to once more react to the malicious trial by media of our Rickey Tarfa (SAN) by the EFCC. Trials are never won on the pages of newspapers, the airwaves and on online platforms.

“The recent 27 count charge allegedly filed against Tarfa by EFCC is not only laughable because as at the time of issuing this press statement, Tarfa is yet to be served with the charge. The media is, however, awash with ‘details’ of the said charge”, he lamented.

On the allegation of the falsification of age, the statement said Tarfa always marked his birthdays publicly and has no reason to lie about his age.

“For the umpteenth time, we as a law firm, assure all our clients and members of the public that we are law abiding and would never be involved in any act in contravention of the law of the country.

“We restate that we appreciate the goodwill, support from colleagues, friends, clients and lovers of human rights, through calls, text messages and personal visits since this persecution commenced and pledge that the 28 year old firm of Rickey Tarfa & Co. will continue to practice its trade in the best traditions of the bar”.