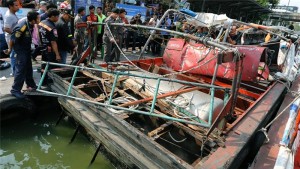 Sixty people have been hospitalised, mostly for burns, after the engine on a Bangkok commuter boat exploded and sent passengers leaping to a nearby pier or into the water. The crowded boat was ferrying passengers on Saturday on a major canal in the eastern outskirts of the Thai capital, which boasts an extensive network of waterways that teem with motorised commuter boats during rush hour.

Most of the injured were later released from the hospital with minor injuries, while 14 were still receiving treatment, according to the city’s Erawan emergency medical centre.

The centre said three foreigners – two Myanmar nationals and one Japanese – were among those injured in the accident. Bangkok’s police commissioner Sanit Mahathavorn said two passengers were seriously hurt by flying debris from the explosion, which shook the wooden boat but largely left its hull intact. “Most of the injured passengers are suffering from burns,” the officer told reporters from the pier on the wide canal where the accident took place shortly after dawn.

An initial police investigation suggested the blast was caused by a fuel leak on board, he said. Witnesses interviewed on Channel 3 described a loud bang that rang out just as the boat was docking, sending some passengers racing for the pier, while others leapt into the canal’s murky waters. The director of Family Transport, a private company that runs the boat service, told the network he had suspended 25 boats that run on liquefied natural gas while the investigation was ongoing.