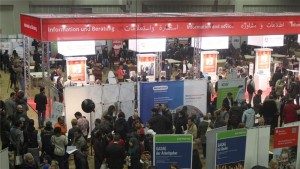 Thousands of job-seeking refugees have attended an employment fair in the German capital of Berlin which attracted 211 prospective employers from a number of fields, including information technology, medicine, tourism and construction. Monday’s event at the Estrel Hotel was part of a collaborative effort by the public and private sector to integrate refugees with protection status into the local labour market.

According to Christian Henkes, spokesperson for Germany’s Federal Employment Agency, which co-organised the event, the turnout was higher than expected, with more than 4,000 job-seekers in attendance.  “There’s big interest on [the] part of the employers that really want to give these people a chance in the country,” Henkes told Al Jazeera. “And there’s also a huge willingness by those people who came here to Germany to find a job.” A total of 476,649 asylum applications were registered in Germany last year, almost twice as many as in 2014.

The number of applicants has continued to rise this year, with 52,103 applications registered in January alone. Over a third of the 2015 asylum applicants in Germany were Syrian nationals. Kais Almudhi, a Syrian refugee who worked as a mechanical engineer before the war, arrived in Germany three months ago and is now hoping to find work.

He told Al Jazeera that it was important for him to make use of the opportunities the job fair presented. “I came here to consult with others, to choose what job is best, and I have registered with three or four companies. I think I have a good chance,” the 45-year-old said.