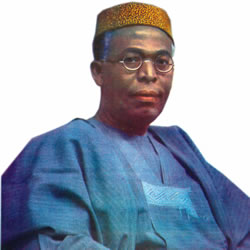 On this day in 1909: Late Chief Obafemi Awolowo was born on 6 March 1909 in Ikenne, Ogun State. He was a Nigerian nationalist and statesman who played a key role in Nigeria’s independence movement, the First and Second Republics and the Civil War. He is most notable as the outstanding first premier of the Western Region but was also a successful federal commissioner for finance and vice president of the Federal Executive Council in the Civil War and was thrice a major contender for his country’s highest office.

A native of Ikenne in Ogun State started his career like some of his well-known contemporaries, as a nationalist in the Nigerian Youth Movement in which he rose to become Western Provincial Secretary. Awolowo was responsible for much of the progressive social legislation that has made Nigeria a modern nation. He was the first Leader of Government Business and Minister of Local Government and Finance, and first Premier of the Western Region under Nigeria’s parliamentary system, from 1952 to 1959. He was the official Leader of the Opposition in the federal parliament to the Balewa government from 1959 to 1963. In recognition of all these, Awolowo was the first individual in the modern era to be named Leader of the Yorubas (Yoruba: Asiwaju Awon Yoruba or Asiwaju Omo Odua).

Also on this day in 2000: The first kidney transplant in Nigeria was conducted at St. Nicholas Hospital by Dr. Shonibare.

Equally on this day in 2001: In Jos, thirty (30) girls died from a fire at the Gindiri Girls School. They were reportedly locked in for the night so as not to mix with boys.