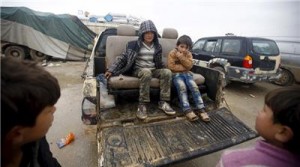 Proposals to send back refugees en masse from the European Union to Turkey would contravene their right to protection under European and international law, agencies and rights groups say. The UN’s refugee agency, UNHCR, has criticised the plans drawn up by Turkey and the EU, saying they would amount to a violation of human rights.

On Monday, Turkey offered to take back all refugees and migrants who cross into Europe from its soil in return for more money, faster EU membership talks and quicker visa-free travel for Turks. EU leaders accepted the offer in principle, with Donald Tusk, European Council president, saying the deal was a “breakthrough” that sent “a very clear message that the days of irregular migration are over”.

The next step for the EU-Turkey plans involves presenting the proposals to EU leaders at a key European Council meeting on March 17 and 18. Ahmed Davutoglu, Turkey’s prime minister, reaffirmed the plan at a meeting on Tuesday with his Greek counterpart Alexis Tsipras, saying that improved cooperation would “reduce the dramatic scenes in the Aegean Sea to a minimum”.