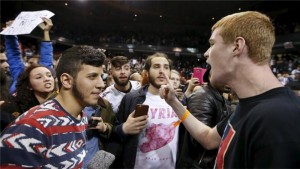 US presidential candidate Donald Trump cancelled a rally in Chicago after it descended into chaos when rowdy shouting matches broke out between the flamboyant billionaire’s supporters and opponents. Backers of the Republican frontrunner and protesters inflamed by his candidacy later shoved and punched each other at the University of Illinois in Chicago where the rally had been scheduled to take place on Friday.

The announcement that Trump would postpone the rally prompted some of the crowd inside the Chicago Pavilion to break out into cheers of, “We stopped Trump!”  But, in boisterous scenes, supporters of the candidate chanted back: “We want Trump! We want Trump!” Scuffles broke out as signs were ripped from hands and police moved in to quickly defuse the most serious incidents.

There were also isolated clashes outside the venue, according to media reports.  The full statement from Trump’s campaign read: “Mr Trump just arrived in Chicago and after meeting with law enforcement has determined that for the safety of all of the tens of thousands of people that have gathered in and around the arena, tonight’s rally will be postponed to another date.

“Thank you very much for your attendance and please go in peace.” However, a spokesman for the Chicago Police Department told the Associated Press news agency that it had not recommended Trump take such a step.  Before the announcement, highly charged exchanges had taken place between Trump supporters and protesters as the crowds waited for his arrival.  Veronica Kowalkowsky, an 18-year-old Trump supporter, said before the event that she had no ill will towards the protesters – but didn’t think they felt the same way.  “I feel a lot of hate,” she said. “I haven’t said anything bad to anyone.”