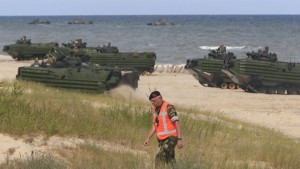 The US is boosting its troop presence in eastern Europe in response to an “aggressive Russia”, the military says. An extra armoured brigade is being deployed, meaning a total of three will be there on a continuous basis. The BBC’s diplomatic correspondent says it is the most significant US reinforcement of Nato since tensions flared over Russian action in Ukraine.

Last month the Pentagon announced plans to quadruple its budget for European defence in 2017. The additional presence will increase US ability to conduct military exercises in the region. The plan demonstrates “our strong and balanced approach to reassuring our Nato allies and partners in the wake of an aggressive Russia in eastern Europe and elsewhere”, said Gen Philip Breedlove, the senior US commander in Europe.

“Our allies and partners will see more capability. They will see a more frequent presence of an armoured brigade with more modernised equipment in their countries,” he added. Each brigade will rotate through the region for nine months before being replaced.

There are about 4,200 soldiers in a brigade, bringing with them military vehicles and other equipment. “There will be a division’s worth of stuff to fight if something happens,” Deputy Secretary of Defence Robert Work told the Wall Street Journal.