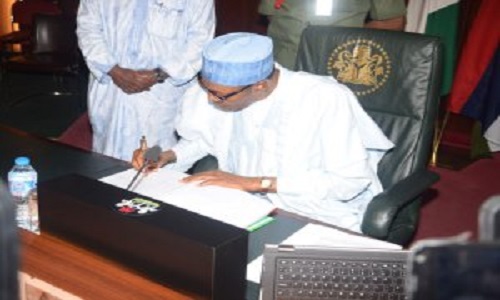 The 2016 budget passed last week by the National Assembly may not be signed into law by President Muhammadu Buhari any time soon if feelers from Aso Rock, the seat of power, is anything to go by.
The N6.07 trillion 2016 budget passed by the Senate and House of Representatives was returned to the Executive without the details, hence the president will await the details before giving assent.
The Senior Special Assistant to the President on Media and Publicity, Malam Garba Shehu, who made this known in an interview, said the tradition is that the details would have accompanied the bill returned to the Executive, but this was not so in the present circumstance.
While acknowledging that there was an urgency to see the budget signed into law, Mr. Shehu maintained that President Buhari cannot sign the bill without first seeing the details, in case there are areas that may require clarifications from the Legislature.
“Yes, the National Assembly has passed the budget and sent the bill to the president but the details did not come with the bill”, he said. “Of course, the president cannot sign something without seeing the details”.
Explaining further, the presidential spokesman said “The normal practice is that the details would have accompanied the bill. When the president presented the Appropriation bill it was accompanied by the details. So that is what we expect and I hope that in less than a week they should be able to conclude whatever work they are doing on the details, and when they do that, they would convey to the president for assent”.
He also stated “that the Executive would look at it (budget). I am not saying that we are not in a hurry ourselves; everybody wants to see things start moving. The country had N3trillion in the Central Bank from the TSA money that would be spent in improving the economy of the country. We are waiting for the details and we will look at it in the hope that there are no major differences that would warrant the president going back to the parliament to ask for changes to be made”.
“Going by the Constitution, the president can even withhold assent; he can veto but we are not expecting that. But as I earlier said, you cannot talk about what you have not seen so let the budget come in details and the president will look at it and decide”, Shehu added.