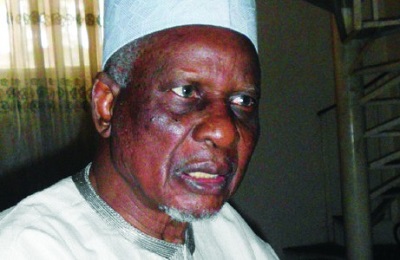 Elder statesman and leader of the Northern Elders Council, Alhaji Tanko Yakasai, has urged the Federal Government to wade into the political crisis in Rivers state, warning that if urgent steps are not taken, it may snowball into the kind of political crisis that characterized the Western Region in 1965.
Mr. Yakasai, who spoke in Kano Friday, also warned that the spate of killings, accusations and counter-accusations that characterized the legislative rerun elections in the state does not speak well of the nation’s democracy.
The politician warned that imposition of emergency rule in Rivers state for whatsoever reason will not augur well in the present situation just as he stressed the need for the Presidency to discourage individuals from using security operatives to intimidate the masses or impose their will on the electorate.
According to him, way back in 1965, “it was a similar trend in the West that people in power at the centre at that time tried to use the power of incumbency to deny the Action Group victory in the West that gradually transcended into killing and mayhem by political opponents. They resorted to killing one another by pouring acid on their political opponents in order to kill or disfigure them”.
He also traced the 1966 coup to the political crises in the West at that time and warned against a replay of such occurrence, pointing out that, “1966 coup was a single act that destroyed political stability of Nigeria and sow the seed of successive political crises which denied the nation the ability to match forward”.
Yakasai recalled that after the 2015 general elections in which the Peoples Democratic Party (PDP) lost power at the centre and regained control of one of the states in the South-South whilst retaining its firm grip on the South-East, some PDP leaders raised alarm over a plot by the governing All Progressive Congress (APC) to forcefully take control of some states the PDP managed to win.
“After the last election and the PDP gained control of the states in that region, allegations were made that APC leaders were scheming to use election petition tribunal to deny them their victory. And true to the PDP accusation, most of the election results in those states won by the party were nullified by the election tribunals. It was only the action of the Supreme Court that reversed the situation and save the peace in that area in particular and the nation at large”, he added.
According to him, “it was alleged that a scheme was hatched to use election tribunal by the APC to take control of the state’s PDP managed to control power. True to that allegation, the election tribunal cancelled gubernatorial elections in more than half of the state’s PDP managed to gain control”.
“After last year’s general elections where PDP lost power, the party managed to win control of some strategic states. A lot of them are in the South-South, this area is where we have the largest deposit of crude oil in our country and it is where large chunk of foreign investment is concentrated”, he added.
The former Adviser on National Assembly Matters to ex-President Shehu Shagari, said there was need for the Independent National Electoral Commission to ensure that when next it will conduct the rerun election in the remaining areas in Rivers state, electoral officials that would be sent to conduct the rerun election must be people with no partisan inclination.
According to him, if that is done, there will not be any need to send thousands of security forces to maintain peace during the election.
“A true democracy is when the minority will have their say and the majority will have their way. So, what I want to say is that a democracy without a strong opposition does not work out. I will like to appeal to those in control of the federal authority not to allow over ambitious politicians to manipulate them to achieve their political objectives”, he added.
He also reminded the Federal Government of the impending dire consequences should states such as Rivers and Bayelsa be allowed to sink into political crisis, noting that “with the huge presence of foreign investors in that state, particularly in the oil and gas industry, it will be of huge consequence for Nigeria if crisis erupts from those areas because the foreign investors will not be happy. Their property and installations will not be safe and it will not be a good omen for our economy, which is already in trouble”.
Yakasai also stated that with the battle against Boko Haram yet to be totally won, giving another opportunity for groups like the Niger-Delta militants, whose operation almost crippled the economy during the regime of late President Umar Musa Yar’Adua, will spell disaster for the country.
He added that, “although considerable success has been recorded in the military campaign against Book Haram tactless killings; to provoke a new insurgency in the Niger-Delta area in the name of imposing unpopular leadership in Rivers state or any place in that area will be unrewarding”.