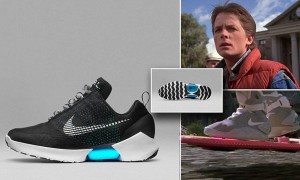 In 1989, when shoe designer Tinker Hatfield created the futuristic, self-lacing Nike Air Mag for Back to the Future II, he probably didn’t think they would become a reality during his lifetime. But 15 years after the film’s release, they’re finally here! The hype began on Back to the Future Day, in October 2015, when Nike teamed up with Michael J. Fox to release a teaser of the self-lacing Mags. Fans still weren’t sure of what to expect, but at the Nike Innovation Summit last week, the company finally announced that they will indeed be mass producing shoes featuring real-life adaptive lacing. They will be called the Nike HyperAdapt 1.0.

The shoes, which automatically tighten once you out them on, were developed over several years by Nike senior innovator Tiffany Beers and her team. She began by meeting with Hatfield, who first dreamed of making adaptive lacing a reality, and he told her to figure out the technology from scratch instead of trying to replicate his Back to the Future idea. So Beers brainstormed with a group of engineers, testing out a wide range of theories before coming up with the technology for HyperAdapt.

“It’s a platform,” Beers said, describing her creation. “Something that helps envision a world in which product changes as the athlete changes.” According to John Hoke, Nike’s vice president of design, the HyperAdapt comes with a battery-powered series of pulleys that cinch the shoe’s throat. So when the wearer puts it on, a sensor inside will register the person’s weight and foot position. “It reads if you’re heavy on your heel or heavy on your forefoot,” he explained. Using this information, the pulleys will tighten the throat to fit snugly around the foot by winding thread around a spool.

The tightness can be adjusted by pushing the plus or minus buttons placed on the left side of the shoe. To take off the shoe, press the button and hold it down for two seconds, after which the shoe will loosen completely. After a couple of wears, Hoke says that the shoe will learn the wearer’s preferred setting and automatically adjust to it. The shoes will operate on a battery, which Nike claims will last two weeks on a single charge. “It is amazing to consider a shoe that senses what the body needs in real-time,” Hatfield said. “That eliminates a multitude of distractions, including mental attrition, and thus truly benefits performance.” But HyperAdapt 1.0 is only the beginning – Nike has several other innovations planned for future versions.