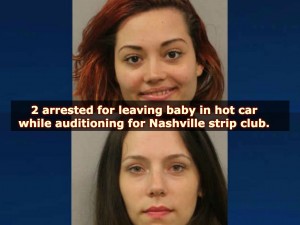 But the friend allegedly left the child inside the car to watch her friend dance. Taylor left the windows closed. It was 72 degrees outside, but the temp in the hot car was 106 degrees.  Police found the baby dressed in heavy winter clothes, drenched in sweat. It was determined by cop that the baby was in the car for 30 minutes.