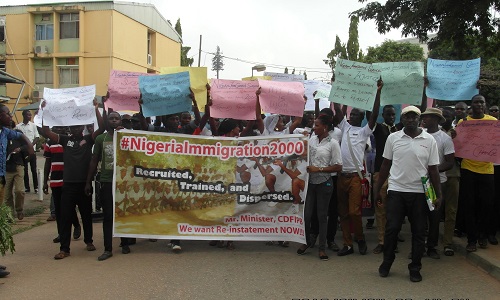 A group representing 2,000 recruits into the Nigeria Immigration Service, NIS, who underwent three months induction training exercise but were suspended, have cried out to the Minister of Interior, Abdulrahman Dambazau, to reinstate them.

The group, which organized a peaceful protest at the ministry’s headquarters in Abuja on Monday, said they had not received any official communication from the government since they were asked to go home last August.

The spokesperson for the protesters, Solomon Ojigbe, who spoke with journalists, expressed dismay over the government’s indifference to their plight.

According to him, all the applicants passed through the rigorous but transparent process of recruitment and were selected based on merit, but, lamented that they were suspended because they were regarded as ordinary Nigerians without any one to fight on their behalf.

It would be recalled that following the ill-fated recruitment exercise conducted in 2014, in which over a dozen applicants lose their lives, then President Goodluck Jonathan constituted a committee to carry out a fresh recruitment process.

The 400 ASI were awaiting the arrival of theirs when the directive to terminate the process was issued.

Ojigbe said: “These young recruits, parents, families and sympathizers have waited aimlessly for over eight months …without any form of pronouncement from the Nigeria Immigration Service, Ministry of Interior, CDFIPB and other government sources.

“While we waited patiently for an official memo in view of our plight, the CDFIPB, Ministry of Interior and the Nigeria Immigration Services went ahead to recruit over 2000 personnel secretly who are presently in the various training institutions without considering us.

“This, we see as a move akin to replacing us. We are, therefore, at the Ministry to demand our immediate resumption”.

Another protester, who gave her name as Memunat Mustapha, said she had to resign her appointment as a teacher to take up the Immigration appointment, stressing that the school refused to take her back when the NIS recruitment process was terminated.

She said she resorted to borrowing from friends to take care of her needs during the training period as they were not paid any allowance while in training camp.

Another member of the group, Maureen Twar, who was employed as an Assistant Superintendent of Immigration, said they were made to buy the complete gear of the Service during the training period.

Among other requests, the group asked to be recalled to duty, directed the issuance of appointment letter to the 400 Assistant Superintendent of Immigration and payment of the salary arrears of all the dispersed recruits.

In his response, the Permanent Secretary of the Ministry of Interior, Mr Bassey Akpanyung, who spoke through his Special Assistant Felix Okonkwo, promised to look into the case and address it accordingly.

“All issues relating to your grievances will be sorted out and everybody will be happy”, he promised them.