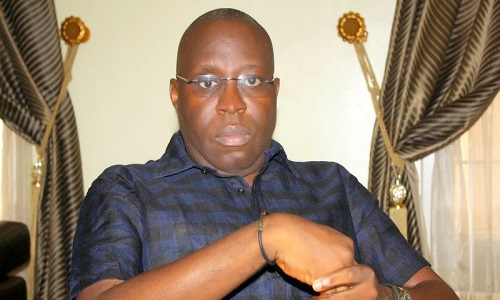 As the Presidency and National Assembly continue to flex muscles over the controversial 2016 budget, a senator representing Oyo North on the platform of All Progressives Congress, APC, Rilwan Akanbi, has urged President Muhammadu Buhari not to sign the fiscal document.
President Buhari reportedly withheld assent to the 2016 budget over alleged removal of some key projects critical to the success of his administration, notably the N60 billion Lagos-Calabar coastal railway.
But the Senate, through its Chairman, Committee on Media and Public Affairs, Aliyu Sabi, Tuesday urged the president to sign the budget as passed by the National Assembly as Nigerians were already groaning under economic hardships.
The Senate said rather than delaying the take-off of the budget, the president should send a supplementary budget capturing the missing project and others.
Going against the position of the Senate, Mr. Akanbi advised Mr. Buhari not to sign the budget without the inclusion of the Lagos-Calabar railway for which the Chinese Government is to provide counterpart funding.
It was the federal lawmaker’s view that since the project needed external funding, it should not be made to wait for any supplementary budget.
“If I were President Buhari, I would not sign the budget because of that rail project”, Mr. Akanbi told PREMIUM TIMES yesterday.
“It is a very important project. The project and that of Lagos-Kano are parts of things for which the President is seeking funding in China. The N60 billion sought for the project is just our counterpart funding.
“So, since the project involves external funding, it is time-bound and cannot wait for supplementary budget. Otherwise, we will be seen as unserious people to foreign supporter, China in this case.
“When the President returns from China, what I expect is that he should return the budget to us (National Assembly) with formal request for inclusion of the project and to any other issues. Amending budget should not take more than one week”, Mr. Akanbi said.
He noted that the Senate Committee on Land Transport chaired by Gbenga Ashafa (APC/Lagos East) included the project in its report after Transport Minister, Rotimi Amaechi, sent his ministry’s supplementary proposal but regretted that the joint appropriation committees of both chambers of the National Assembly, removed the project.
“They (Appropriations Committee arrogated too much power to themselves. Why should they remove a project without respect for the concerned committee? Fine! It was omitted earlier but the Minister later brought it and the concerned committee approved the project. They should not have removed and included projects not even proposed at all without even feasibility reports.
“So, the President should return the project”.