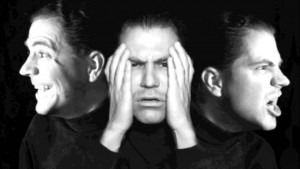 The symptoms can be so subtle, you don’t even know you have a problem.

We all have moods; after all, we’re all human. If you’re the most positive person in the universe and completely OK with life and death, you’re still going to be sad when someone you love passes away. You might be someone who prefers not to have big emotions, but you’re still going to have moments where you feel something.

A mood can be anything: angry, ashamed, relieved, humiliated, stressed, silly, shocked, upset — it’s a temporary state of mind or feeling. But if your moods noticeably fluctuate from your baseline and you feel at the mercy of your emotions, then you might have cyclothymic disorder.

Cyclothymic disorder is a rare mood disorder that causes emotional ups and downs, but not as extreme as those felt by individuals with bipolar 1 or 11 disorder. Some people think of cyclothymic as “bipolar lite” since its symptoms are similar, and is marked by episodes of low-grade depression and hypomania.

Cyclothymia disorder affects up to one percent of the population; however, at a hospital’s psychiatric department, it’s anywhere from three to five percent, according to Dr. Stephen B. Stokl, author of Mentally Speaking.

“Cyclothymia has an insidious onset that starts in late adolescence or early adulthood and has a chronic nature,” he says.

Most people never get treatment for this mental illness because their symptoms don’t seem incapacitating and they don’t realize they have an illness. It’s usually a loved one who notices that there’s a problem, finding it difficult to live with someone with such erratic moods. And the effect of cyclothymic disorder on relationships is dramatic.

“Cyclothymia usually comes with a high morbidity in terms of breakdowns in relationships, both personal and at work,” Dr. Stokl says.

Since the moods of cyclothymic disorder range from depression at the “feeling low” en,d to hypomania at the “feeling on top of the world” end, the signs are divided between the two.

You may have hypomania if:

You’re beyond optimistic and everything is always fantastic.
Your thoughts are going a mile a minute and when they focus on just one, you immediately think of something else.
You talk super-fast.
It seems like every day you need less and less sleep.
You have an extremely high sex drive.
You exhibit a lot of risk-taking behavior.
You’re meeting all your goals and making new ones just as quickly.
Your focus is off and you’re easily distracted.
You’re spending way too much money.
Your decision-making skills have gone to sh*t.
You’ve become quite the jerk and are very inconsiderate of others.
You’re constantly annoyed, agitated, irritated and restless.

You may be in the depression phase of cyclothymic disorder if:

You feel intense sadness, overwhelming hopelessness, regret and guilt, but can’t come up with a reason for feeling as awful as you do.
You’re so anxious it’s like having a panic attack 24/7.
Your sleep patterns are all messed up and you either suffer from insomnia or you sleep too much.
You have problems either overeating or practically starving yourself.
Nothing seems interesting to you and you don’t really want to do anything.
You have no sex drive.
Your mind seems like a sieve and you have trouble concentrating.
You have headaches, stomach aches, or other health issues.
You have suicidal thoughts or behaviors.

If you recognize these symptoms, please talk to a mental health professional and tell them which symptoms you have and the triggers for the behaviors, and find out your treatment options. Some people advise against medication, since antidepressants are known for worsening cyclothymic disorder in the long run, and some recommend a combination of antidepressants and mood stabilizers.

Psychotherapy is a highly effective treatment for cyclothymia, and can give you valuable coping skills that will help rebuild your relationships and create healthy routines. You aren’t just moody when you have cyclothymia; you’ve been hijacked by your emotions and you need to get help.