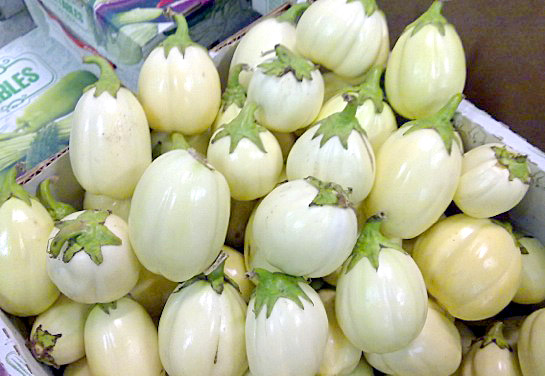 Garden egg is one food Nigerians love. It is either enjoyed fresh alone or with groundnut or cooked into a sumptuous sauce, which is eaten with boiled yam or plantain. Garden eggs are usually at their best from August through October when they come to the market in droves. They come either in cream-colour flesh or green and have a pleasantly bitter taste (due to the presence of small amounts of nicotinoid alkaloids) and spongy consistency. Did you know that garden egg plant could reduce constipation??? Well, Yes! It offers even more benefits that INFORMATION NIGERIA has highlighted in this piece…

-Experts believe that a high level of blood cholesterol level, more particularly low-density Tipoprotein cholesterol, is a primary risk factor for cardiovascular diseases, such as stroke and heart disease and garden egg has the power of reducing these risks. According to Dr. Ndubuisi Nwakakwa, Deputy Provost Graduate Administration, Federal Collage of Complimentary and Alternative Medicine, Ikosi, Ketu, Lagos and physician/consultant Acupuncturist at Green leaves clinic and Acupuncture center, Ilasamaja, Lagos, when compared to apples and oats, garden egg plant is more helpful for reducing cholesterol.

-It improves good for sight, experts have also said, as it has positive effects on visual functions. A study conducted by some experts, S. A. Igwe, Dora Akunyili and C. Ogbogu, Published in the 2003 issue of the journal of Ethno pharmacology on “Effects of Garden Egg on some visual functions of visually active Igbos of Nigeria” found that eating plenty of garden egg can help lower eye pressure in persons with glaucoma. The study, which initially set out to find out if there may be complications associated with its excessive consumption in the male volunteers that were involved in the study, found they all had a reduced pupil size. They also had a lower intraocular pressure. It dropped by 25 per cent, even though it was yet still within the normal range. They concluded that garden egg consumption did not produce any vision discomfort and that people needed not fear eating plenty of it since it could even help to lower eye pressure in persons with glaucoma.

-Some Nigerian scientists have also propounded that garden eggs are also excellent for weight reduction. There people who are trying to loose weight within a short period of time should eat a lot of garden eggs in fresh form because it is very low in calorie content.

-Some Nigerians believe that it also represents fertility and blessing and thus,  it served during wedding ceremonies in some parts of Nigeria.

-Expert in a study indicated that garden egg could be used for the treatment of stomach ulcers. The study was undertaken to evaluate the possible anti-ulcer effect of the African garden egg and was published in the 2011 Journal of the Asian Pacific Journal of Tropical Medicine by Anosike Chioma, Abonyi Obiora and Ubaka Chukwuemeka. All were from the University of Nigeria, Nsukka, Nigeria. They found that it possessed ulcer protective properties against ulcers induced experimentally, making it a cheap source of natural anti-ulcer remedy.

So are you having some today???