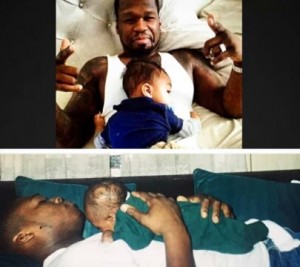 He made this decision after the said son decided to side with his mother.

50 Cent however still shows his second son, Sire, which he had with video vixen Daphene Joy much love.

He seems to now be facing major backlashes on social media for neglecting his first son.

Today, he shared the baby photos above with his sons and wrote: “Same treatment, complete different relationships.”

According to reports, 50 will legally stop paying child support to his first baby-mama and his oldest son this year.