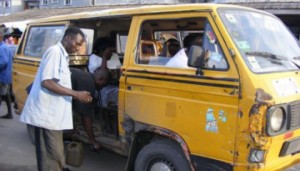 Being in a danfo can go from very exhausting to very educating and from irritating to fun. You get to learn a lot of things about trending topics from those who really know and those who claim to know but in essence don’t know jack but would rather die than keep quiet. Passengers in  a danfo could argue about any topic from political to personal. There is never a dull moment in a danfo. Whether the argument is about government or not, there are always six categories of person you are most definitely going to argue with in a  danfo and INFORMATION NIGERIA brings them to you in this piece…. Sentimentalists: These ones manipulates facts to oppose those they are against and never say anything positive about the government or party they don’t like. It doesn’t matter if President Buhari recovers one hundred billion dollars each day from looters till he lives office, they don’t like him, they don’t like him,end of story. They would find a way to use whatever he does right against him.

Unofficial journalists: They have very minimal knowledge of the matter at hand but claim to know what’s going on in Nigerian politics better than even political analysts. They listen to the winning side of the argument and quickly join them. The bring up outdated or outlandish points. Their points could be so ridiculous that even the deaf and dumb person on the bus would be forced to oppose.

Professors: These ones tend to know a bit too much on the topic. For instance, they could start to use very deep rooted conspiracy theories to analyze President Buhari’s trips abroad. They are the ones who speak and expect everyone else including the very apolitical conductor to listen. Complainants: These ones are usually the ones who start the argument. They just totally bring up a very controversial topic by manner of complaining and hope one person joins in the bout of complain with them or oppose them. That simply how the argument between those for and against the government of the day begins.

Clueless: These ones do not listen to news nor read the papers and most times only just nods to the points that sound appealing to them. They are neither strictly on any side of the divide nor do they have meaningful contribution to support any side.

Historians: These ones would take you right from the time of Shagari to Abacha then to Buhari, when he was a military head and now that he is a civilian head. They would tell you things about Jonathan even Jonathan himself doesn’t know about himself. Its OK if its an old Nigerian but when you find the person talking can’t be more than his early 30’s.

Which category do you belong to…LOL