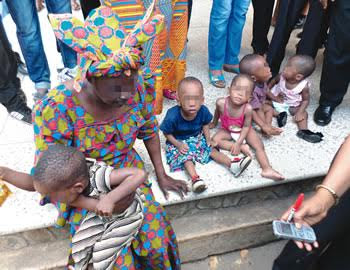 According to Tribune, Asabi who is a US-returnee, was arrested at an orphanage in Oyo where she had gone to obtain a certified police report to put the babies up for adoption.

Asabi who was paraded alongside other suspects at the Oyo state police command on Wednesday April 20th, told the Tribune that she had been in search of a child for many years

“I had been looking for fruits of the womb for many years until I reached menopause. Over two years ago, someone introduced me to a woman at Ikorodu, Lagos State, who could facilitate pregnancy through herbal concoction, so I and other women went there and were given the concoction. After that, I had sex with my partner. I am not married. We took the concoctions for nine to 10 months before we delivered. For delivery, we were taken to Port Harcourt. I delivered twins from the first pregnancy over two years ago. I got pregnant the second time and had triplets about a year ago. I paid N1million for the treatment on each of the children. In total, I paid N5million. I breast-fed my children for three months before weaning them as babies. ”

When asked why she had to pay N1million on each child since multiple births could come from any pregnancy, Asabi replied that the woman who gave her treatment told her ahead of delivery that she would pay according to the number of babies from each delivery. She said that she took the police to the place where she delivered the babies in Port Harcourt but the operators of the fertility clinic, a couple, were nowhere to be found.

On how she found herself in Ibadan though residing in Lagos State, she said: “I came because the owner of an orphanage I approached said that if I wanted to get the children adopted, I would need to get a police report to take them out of Nigeria.”
Asabi denied claims of buying the children. She said the fertility hospital that helped her get pregnant was run by a couple, Mr and Mrs Okoro who are currently at large.
Speaking on her arrest, the state Commissioner of Police, Leye Oyebade, said she was suspected to be part of a child trafficking syndicate who sell children to people residing abroad. According to Leye, Asabi was arrested after the force received a report from the proprietress of an orphanage in Ibadan on April 14, 2016, that the suspect requested her to assist in getting a police report to fly her five children abroad.
“I directed the officer in charge of the Juvenile Welfare Centre of the Division to arrest her. When she got to the station, she told the police that she got the children for N1million each. She confessed that she got the children from a woman in Port Harcourt, Rivers State, but when the police from Oyo State command got there, the woman, who probably got a hint that the police were after her, could not be seen.  We are trying to find out how the person who sold the babies came about them. Before we can get the details of the children, we have to get the person who sold them because she is the one that can give account of how she came about them. While at that, we have been able to identify that these are children that have been sold and for us to trace their origin, it will take some time. Investigation is still ongoing,” the police commissioner stated.
All the children have been handed to officials at the state Ministry of Women Affairs while investigations into the matter is ongoing.
Source:LIB