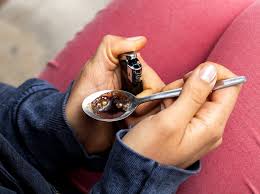 During a recent drug and alcohol abuse awareness campaign in Palapye, Captive Eye Organisation CEO, Percy Mothibi said while marijuana and cocaine were the two most popular drugs among youths, addicts also resorted to other concoctions. “When we did our research about drugs which are used in Botswana, we found out that marijuana is the most used, then cocaine. There are other mixtures including human waste and Vim, dust from vehicle exhausts and dust from inside television sets that is also said to be mixed with ARVs,” he said.

Captive Eye’s studies found out that the mixture of dry human faeces and Vim, called CAT, is very strong and thus highly addictive.  “These youths steal their parents or other relative’s pills such as ARVs and those taken for diabetes to make their own drugs,” Mothibi told a stunned audience.

“Such drugs are taken through different methods such as injections, smoking or sniffing. Others are put in alcohol.” The organisations’ research has shown that all manner of drugs are on the increase among youths, being distributed at schools, parties and outings. Mothibi said some youths were even selling their drugs at churches and  setting up “businesses” in worship centres.

“There are some youths who confessed that they do such. Others said they even sell under their parents’ orders. It is very dangerous for parents to use their children in this way, to make money.  “Our country is in a very challenging situation in terms of drugs and it’s a pity because the majority of users are youth who should be regarded as the country’s future leaders.”

Mothibi said drug addiction was behind trends showing that the majority of patients in mental health institutions in Botswana were youths. Others, he said, had resorted to prostitution to make money. He added that in prisons, youths made up the majority of inmates, with most of the crimes committed under the influence of drugs and alcohol.  “From the research that we did from January to February, 81 teenagers between 15 and 20 years fell pregnant and many said they were under the influence of alcohol,” Mothibi said.