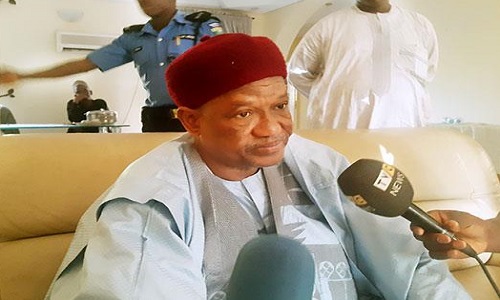 Two-term Governor of Yobe State now senator representing Yobe East, Bukar Abba Ibrahim, has revealed that almost all former governors, who are now serving senators, with the exception of himself, have one case or the other with the Economic and Financial Crimes Commission, EFCC, or Code of Conduct Tribunal, CCT.
The senator was speaking against the backdrop of Senate President Bukola Saraki’s trial at the CCT.
Senator Ibrahim, who described the Senate president’s trial for alleged false and anticipatory declaration of assets as “unfortunate”, blamed the development on local politics from Kwara State, where Mr. Saraki was a governor for eight years.
“The Saraki saga is an unfortunate thing”, he said in an interview with newsmen in Damaturu, the Yobe State capital yesterday.
“The saga is a saga; it will still continue. The court will definitely make its pronouncement. Whatever the court decides, we will obey. The worst that could happen is to go to the Supreme Court where everything ends. But I can assure you that 99 percent of senators are behind Saraki for the simple reason that we are all human beings, and we do make mistakes”, he added.
According to the senator, “When you are a governor for eight years, there is no way you can account for every kobo. So, if anybody wants to investigate you thoroughly, he will find a fault here and there. It may not necessarily be falsehood, or that you intended in a way to harm the economy, or intended to be a financial crime as being speculated”.
The Chairman, Senate Committee on Ecology and Climate Change, who concurred with the speculation that the trial is politically-motivated, absolved President Muhammadu Buhari of blame.
“It looks like a local political motivation from Kwara. Definitely President Muhammadu Buhari has no hand, and definitely the federal government of Nigeria did not initiate it. It was local politics in Ilorin. People made complaints; they gave the details of what they thought Saraki had and he didn’t declare, that was how EFCC came in and started investigating”, Senator Ibrahim said.
Responding to a question if former governors in the Senate, who are a powerful bloc in the upper legislative chamber are in solidarity with Saraki, the former Yobe governor answered in the affirmative and gave his reasons.
“Of course yes! You know that there are so many other former governors who are in the same shoes with Saraki; whose trials have been initiated, but they were not publicised like that of Saraki, because he is the Senate president. Almost every former governor in the Senate with the exception of Bukar Abba Ibrahim, has one case or the other with the EFCC or CCT”.
While calling for the strengthening of institutions in the fight against corruption, Mr. Ibrahim, whose wife is a member of the Federal cabinet, said “It’s not easy to fight corruption especially when it comes to individuals; that is why those of us do believe that corruption can best be dealt with through institutions. Let’s strengthen our institutions, stop giving and taking bribes. Institutional fight of corruption is the best fight we can have as a nation. It has begun, and it will continue for a very long time”.
Culled