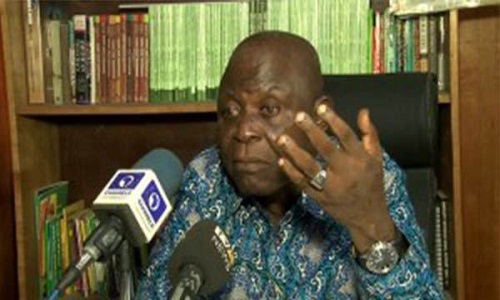 The Convener, Coalition of Democrats for Electoral Reforms, Chief Ayo Opadokun, has called on President Muhammadu Buhari and Vice President Yemi Osinbajo to “watch their backs” as they execute their administration’s anti-corruption campaign.
Opadokun, who made the call during an interview at the weekend in Lagos, noted that with the amount of effort currently put being by the Economic and Financial Crimes Commission into probing how Nigeria’s treasury was allegedly looted, “corruption, its enterprise and its proprietors will not be watching idly”.
The activist and one time General Secretary of the National Democratic Coalition, NADECO, said he feared that corruption would soon fight back.
“That is a major reason for my fears. Certainly, I know that they are not sleeping over what is happening”, he said.
According to Opadokun, for the first time, some bigwigs and untouchables are being touched.
He, however, warned that those being prosecuted by the EFCC and other anti-graft agencies would have started plans to frustrate the campaign and the Buhari-led administration itself.
He said, “They will not be watching idly. Therefore, my fear is that – I am saying this with all sense of responsibility – President Muhammadu Buhari needs to look over his shoulders. Corruption will not be watching idly.
“They will not only try to impure his own integrity and honour as well as that of (the Vice President) Prof. Yemi Osinbajo; I fear that they can do worse things than that.
“We should remember that it was a bodyguard of Indira Ghandi that eliminated her. We should also be mindful of the fact that as popular as President Gamal Nasser of Egypt was, it was a bodyguard that eliminated him.
“So, for the sake of the general good of our country and for the sake of the anti-corruption crusade that President Buhari and and Vice-President Osinbajo are executing, they need to watch their backs”.
Opadokun said although Buhari has experience as a retired major general and former military ruler, he should remember what happened to him in his first stint as Head of State.
“He should be on guard and be much more watchful over his shoulders because of those who have stolen”, he added.