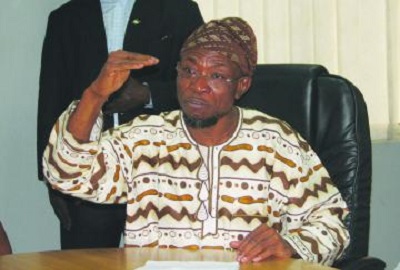 Governor Rauf Aregbesola of Osun State has sought the approval of the state House of Assembly to review the 2016 budget estimates downward from N150.7 billion to N137.9 billion.
This is contained in a letter he wrote to the state lawmakers and read by the Speaker, Najeem Salaam, at plenary in Osogbo on Monday.
According to the letter, the governor asked for a downward review of the personnel cost from N33 billion to N32 billion, overhead cost from N12 billion to N9 billion.
The capital expenditure was also reduced from N67.9 billion to N58.8 billion, while the consolidated revenue fund charge remained N37 billion.
The letter read: “The current economic downturn in the country, occasioned by the dwindling revenue accruable to the federation account, necessitate the need to reduce the cost of governance.
“Therefore, it has become pertinent and inevitable to restructure the 2016 draft budget in line with the reality on ground.
“In line with the extant rules and regulations, the house, through your office is being informed about this new development”.
Recall that Governor Aregbesola had on December 10, 2015, presented a budget of N150.7 billion to the assembly.
The appropriation bill is still pending before the assembly.