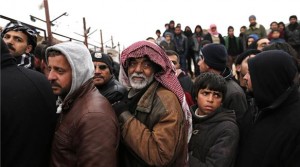 At least 40,000 Syrians have fled fighting near the northern city of Aleppo in recent days as government forces continue an offensive against opposition fighters despite a truce, the United Nations said. Escalating violence has pushed people eastwards towards the strategical border town of Azaz, as well as the Bab al-Salam and Sijjou refugee camps, the UN Office for Humanitarian Affairs (OCHA) said on Wednesday.

“Taking into account the previous influx of over 75,000 internally displaced people into the Azaz sub-district in January and February, humanitarian needs are expected to rise exponentially,” OCHA said in a statement.  The UN expressed deep worry on Wednesday over the fate of the thousands displaced by the fresh fighting.

“We are extremely concerned at the intensification of fighting in northern Syria and its impact on civilians, as well as humanitarian delivery to the area, and continue to monitor the situation closely,” Ariane Rummery of the UN refugee agency said. Aid agencies have distributed food baskets and blankets, jerry cans, mattresses and plastic sheeting for thousands of newly displaced people and are preparing to scale up the response, she said.

The medical charity Doctors Without Borders (MSF) said that there were now more than 100,000 people trapped on the Syrian side of the Turkish border, with 35,000 having fled in the past week from camps that had been taken over by Islamic State of Iraq and the Levant (ISIL, also known as ISIS) fighters or had become too close to the frontline.