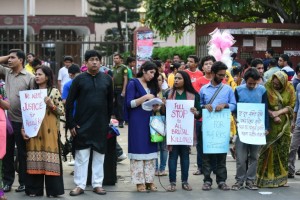 A Hindu tailor has been hacked to death in a district of central Bangladesh, police say, the latest of a number of such killings in the country. Nikhil Joarder, who was in his early 50s, was attacked as he sat outside his shop in Tangail on Saturday afternoon. Police said he had been arrested in 2012 for allegedly making derogatory comments about Islam, then released.

A number of similar recent killings in Bangladesh have been claimed by Islamist militants.On Monday, Xulhaz Mannan, a leading gay rights activist and editor at the country’s only LGBT magazine, was hacked to death along with another man in his Dhaka flat. The killing was claimed by the so-called Islamic State (IS), but Bangladesh says the group has no presence in the country.

IS said it was also behind the killing of Rezaul Karim Siddique, a university professor, two days earlier. Last year, four prominent secular bloggers were also killed with machetes. The four bloggers had all appeared on a list of 84 “atheist bloggers” drawn up by Islamic groups in 2013 and widely circulated.