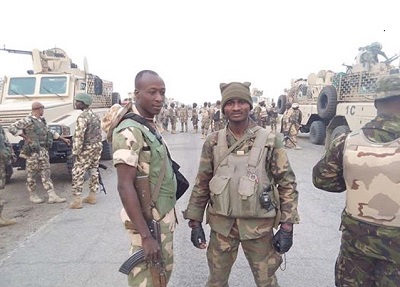 The Buhari Media Support Group (BMSG) has hailed the lead¬ership, and men of the Nigerian Armed Forces for their recent exploits in the Boko Haram-ravaged North East re¬gion of the country, which it said has given a new lease of life to the peo¬ple of the region.
In a statement issued in Abuja yesterday, the BMSG spe¬cifically drew attention to the feat performed by the Army in locat¬ing and rescuing a total of 11,595 men, women and children held captive by Boko Haram.
It said the feat was in addition to the continuous routing of the terror¬ists in many parts of the region which has transformed the once invincible terrorist sect into a fleeing band of fighters with the attendant surrender of many Boko Haram members to the Army on a regular basis.
The BMSG noted that there is a new dawn in the area of national se¬curity whereby the Ni¬gerian Army frequently updates Nigerians on the developments in the theatre of war.
According to the group, “gone are the days when informa¬tion from the Army on the war against Boko Haram is received with skepticism by the ma¬jority of Nigerians. All that has changed as information from the Army can now be veri¬fied by any interested person”.
The group insisted that the reason for the positive outcome in the fight against Boko Haram is responsible and focused leadership provided by the admin¬istration of President Muhammadu Buhari, which is now rubbing off on the Armed Forces and other sectors of the nation’s life.
The BMSG, therefore, urged Ni¬gerians to continue to support the Army in its fight against the ter¬rorists and the change agenda of Mr. President.