Many are of the opinion that former Lagos state governor, Asiwaju Bola Tinubu was born right at the middle of a money-printing machine, but that is not true. 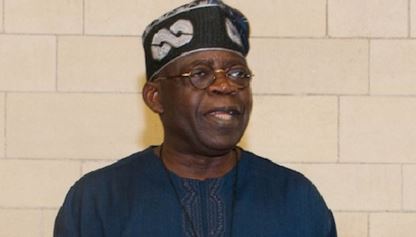 Some rumours also have it that his parents were very wealthy, so he practically worked for nothing in his life but that is also not true.

The diminutive Nigerian politician had to work his way up the ladder. He was once a cab driver and even a security guard who worked very hard to reach where he is today.

In a special publication by TheNEWS magazine, Tinubu detailed how he worked has a cab driver and a security guard. Here are excerpts from the interview.

Q: When did it strike you to travel out of the country?

A: I was lucky. Even though I was ambitious about travelling out of the country, particularly as my friends like Folabi Salami and Tokunbo Maxwell had just travelled to Germany, I would say that I was just lucky.  Others, like Nurudeen Olowopopo, of blessed memory, and Sola Popoola headed for the United States and it remained Tunde Badejo, Bolaji Agaba and myself. So, the three of us were determined that we must get out of Nigeria, too.

I went to Ikenne, with my late sister, for a big ceremony. We had gone to pick bottles of Coca-Cola from the cold room and wanted to quickly return to the St. Saviour’s Church, where my sister was. There was a sudden rain of bullets and had we not been rushing to the church to ensure that we didn’t miss what was going on there, I would have died. The young man that was standing with me was hit. He slumped and died.

Based on the sad incident and how I had narrowly missed death, my family said to me: ‘This boy, you have always said that you wanted to travel out of the country, it is time to do so.’ So, my mother gathered some money, sold her trinkets to make up for the remaining part of my allowances and joined it with proceeds from the sale of the Volkswagen Beetle given to me by my uncle, the late Ganiyu Tinubu, who used to work at Simpson Street, Ebutte-Metta. He had a Beetle car he bought from a Canadian and had it converted into a convertible, which I used to drive. Nobody taught me how to drive. He asked that I sell it and add the proceeds to the money I needed for my trip. That was what I did.

Bolaji Agaba and I left the same day for the United States, while Badejo left some months later. We got our visas through my family connections. Bolaji’s own had almost expired before we left. On our arrival in the US, we thought we would stay in New York. But Nurudeen Olowopopo said no and we put some money together for Bolaji’s ticket and we headed for Washington D.C. I stayed with the late Sola Popoola at Washington before we started finding our way. We were running out of funds then.

He helped us secure a one-room apartment in Alexandria, Virgina. We got an unregistered used car (they left the licence open) commonly called Gypsy, which we ran as a taxi. We operated at the airport, where we picked passengers, and not anywhere else, like the hotel because it was forbidden for unlicensed cab drivers to do so. We did that for a while to raise some money. We did, and Bolaji went to Tennessee, while I headed for Chicago.

Q: Can you tell us some unpleasant moments that you had then?

A: One experience I will not forget was when I over-charged a naval officer, who was returning to the country. It was not intentional. Apparently, I didn’t know the direction; there was no GPRS in those days to locate directions. So, he gave me the direction to his house in a Virginia suburb. I gave him the price and the man responded with a slap to my face. He said I should know the correct fare to charge to the location he mentioned. He slapped me and gave me the money.

Another experience was when I took a guy whom I didn’t know was drunk. When I drove to his house, he pointed a gun at me instead of paying the fare. He took my leather jacket and said: ‘Get into your car and get lost.’ He did not pay. Another interesting one was when I was taking the third Accounting class and equally working as a security guard at a construction site. They were very serious with their kind of security. You just had to do that job. There were about six points with six clocks at the site, which the security man must wind every hour and with a dog in hand. So, there was never a chance of trying to catch a nap.

As I was doing my accounting assignment, I fell asleep. I was dead asleep! The inspector came to the site and found me sleeping, with my head on my books. He simply pulled the register and wrote: ‘I have been here. You were sound asleep. So, see me tomorrow.’ When I woke up, I found that Skiddo (the dog’s name) was gone, and then the register. I just went to a corner, cleaned my face and concentrated on my assignment because I knew the job was already gone. You can’t lose two things. I ensured that I read well for my test and passed the next day. I opted to post their uniform and the cap to them, but suddenly ran into the man and he handed me my cheque and said the job was gone. I told him I knew and we said goodbye to each other! I had to start looking for another job.