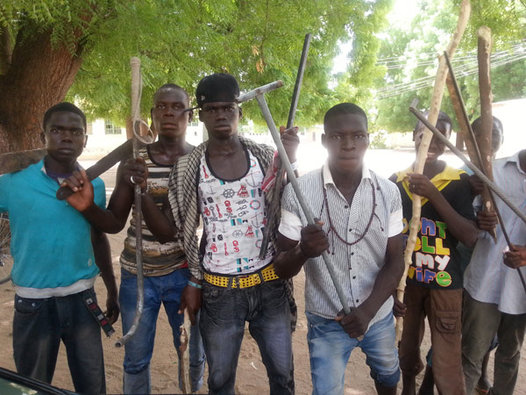 As Nigeria prepares for the post-insurgency era occasioned by the activities of Boko Haram, the Borno Government on Monday said it had produced a blue print for full engagement of an estimated 20, 000 local vigilantes, popularly called the Civilian JTF.
The Commissioner of Justice, Alhaji Kakashehu Lawan, stated this while speaking with journalists in Maiduguri, the state capital.
The commissioner was reacting to fears expressed by residents of the state that the unemployed vigilantes may become another security threat during post insurgency era.
“Governor Kashim Shettima has developed a blue print for the post Boko Haram insurgency era in the state.
“One of the agenda on the blue print is youth integration, which encapsulates all youth in the state including members of the civilian JTF”, Mr. Lawan said.
He said that the blue print made provision for the creation of a youth empowerment agency to cater for the members of the civilian JTF.
“Already, a law has been passed by the Borno House of Assembly known as Youth Vigilante Empowerment Agency Law 2015, to cater for job creation particularly targeting members of the group.
“The agency is expected to engage members of the group by providing different kinds of jobs for them”, he said.
Mr. Lawan added that the state government had also made contact with the Nigerian Army authorities to enlist those qualified into the service.
“What we have done as a government is to liaise with the Nigerian Army high command to have a large chunk of them recruited into the army”, he said.
“We are also working on plans to recruit between 500 and 1, 000 of them as fire fighters in the state department of fire service.
“We also have plans to engage about 500 of them as Vehicle Inspection Officers (VIO)”, he said.
Mr. Lawan said that those who possessed higher educational qualification will be absorbed into the state civil service.
“Those who are graduates and National Certificate In Education (NCE) Certificate holders will be absorbed into the State Civil Service”, he said.
The Civilian JTF, which emerged in 2013 helped in developing effective community policing and enhancing the fight against Boko Haram in the state.
(NAN)