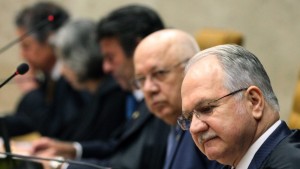 Rival members of the Brazilian parliament are taking part in a controversial impeachment debate that could topple President Dilma Rousseff on charges of breaking budget laws. Rousseff is fighting to survive a political storm prompted by Brazil’s worst recession since the Great Depression in the 1930s and a corruption scandal that has reached her inner circle.

She is accused of manipulating budget accounts during re-election in 2014. The sessions, which will go on until Sunday, will lead to a vote that could take Rousseff, 68, closer to being driven from office. The development comes as Brazil, Latin America’s biggest economy, struggles through a recession.

The government’s lawyer, Jose Eduardo Cardozo, drew complaints in the chamber when he repeated Rousseff’s claim that the impeachment drive was a “coup”. Brazil faces a tense weekend as the debates continue and rival protesters plan to take to the streets.

Rousseff’s supporters have been gathering for days in a stadium in the capital Brasilia, where she was expected to visit them on Saturday. Pro- and anti-Rousseff rallies are also planned in other cities on Sunday, including the economic capital Sao Paulo and Rio de Janeiro, where the Olympics will run from August 5-21.