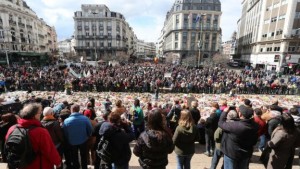 At least 7,000 people took to the streets of Brussels in a march “against terror and hate”. Heading the processions were some of those caught up in the suicide bomb attacks on Belgium’s airport and metro station that killed 32 people. Belgian broadcaster described the march as “calm and silent”. The march had been due to be held a week after the 22 March attacks, but officials asked for it to be postponed because of the security threat.

Relatives of victims, and paramedics and airport staff affected by the attacks joined people of several religious faiths on Sunday’s march. Flowers were carried in memory of those who lost their lives. The procession took them past the Molenbeek neighbourhood – where many of those alleged to have carried out the attacks in both Brussels and Paris had lived – and to the makeshift memorial outside the city’s stock exchange.

One of the organisers of the march, Hassan Bousetta, told the AFP news agency: “When our fellow citizens, defenceless civilians, are cut down in a cowardly attack, all citizens should stand up to express their disgust and solidarity.” The turnout was less than half of the 15,000 organisers had hoped for.