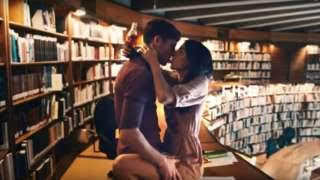 Kenya’s Film Classification Board (KFCB) has forced Coca-Cola to scrap a k!ssing scene in a television advert because it “violated family values”.

In the three-second scene two strangers have a passionate embrace in a library.

The head of the film board, Ezekiel Mutua said Coca-Cola has agreed to release a new version of the commercial without the scene on Wednesday night.