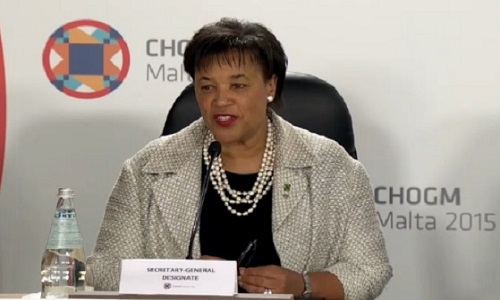 The Commonwealth Secretary-General, Patricia Scotland, Thursday, hailed President Muhammadu Buhari for demonstrating “brave leadership” in the fight against corruption in Nigeria.
Scotland made the commendation while addressing a conference of High Commissioners and judges in London.
A statement from the Commonwealth’s Interim Head of Media and Public Affairs, Will Henley, quoted her as saying “I must commend President Buhari of Nigeria for his brave leadership in tackling corruption head-on and commitments to reform the legal system. President Buhari’s envoy, Professor Gambari, who was the Nigerian foreign minister and UN Under-Secretary-General, is working with Madeleine Albright in New York to develop an international consensus on anti-corruption”.
The Secretary-General also announced plans to launch a new Commonwealth ‘kitemark’ against corruption, alongside a new Office of Civil and Criminal Justice Reform.
This effort, she said, would aim to provide all the 53 member countries of the organization with the templates and support they require to develop legislation and best practices.
Scotland, who was Attorney-General in the UK and one of the brains behind the formulation of the country’s Bribery Act, promised to step up collaboration among member countries to confront corruption in all its forms.
“I want to make it clear that I have heard the high priority given by all member states to eliminating fraud, bribery and the corruption which continues to undermine development and compromises fairness and equality of opportunity in our societies.
“Every dollar lost to corruption is a dollar lost to investing in a child’s education, healthcare or much needed infrastructure”, she said.