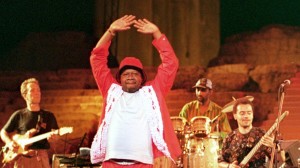 Papa Wemba, known around the world as the “king of Congolese rumba”, has died after collapsing during a concert. The musician fell ill on Saturday while performing at a music festival in Abidjan in Ivory Coast on Sunday. He was 66. The cause of his death is not known yet.

Baudouin Banza Mukalay, culture minister of the Democratic Republic of Congo (DRC), confirmed his death, calling it a “great loss for the country and all of Africa”. “He was known as a true trendsetter,” Suzana Omiyo, a Kenyan musician, told Al Jazeera. “One thing I remember about Papa Wemba was his way of performing and the fact that he was able to take African music to the global map. I believe he was one of the greatest musicians.”

Video footage showed the moment when he slumped to the floor behind a group of dancers before performers rushed to his aid. “Papa Wemba wanted to die on stage, that’s what he told me two weeks ago when I spoke to him on the phone,” Salif Traore, a festival promoter and singer also known as A’Salfo, told the AFP news agency.

The electric performer first burst onto the African music scene in the 1960s and scored one chart-topper after another, fusing African traditions with Western pop and rock influences. In a career spanning nearly five decades, he won many fans across Africa and the French-speaking world.