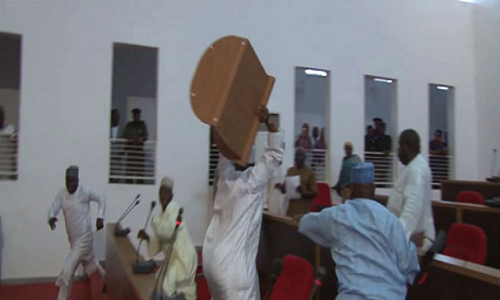 Governor Umar Tanko Al-Makura of Nasarawa State yesterday washed his hands off the fracas in the House of Assembly.

Members of the State House of Assembly on Monday turned the hallowed chamber to a boxing ring as they brawled over newly inaugurated councils’ sole administrators by the governor.

Two factions in the House clashed over the appointments barely two hours after Mr. Al-Makura swore-in the administrators.

Six out of the 24-member House alleged that the other lawmakers had received money from the governor to go against their resolution.

But Governor Al-Makura denied the fracas had anything to do with him, saying as leader of the All Progressives Congress, APC, in the state, he would reconcile the lawmakers.

He explained that he was constrained by a court order to appoint sole administrators to avoid a vacuum in the councils.

He, however, said election into councils would hold in six months.

Al-Makura, who spoke in Abuja, said the state would not condone any act of brigandage.

“I was not involved in the fracas. The lawmakers had their problem long before now; I had nothing to do with it.

“The issue about the appointment of sole administrators came after a court judgment. The former chairmen went to court against one-year tenure and the court granted them two-year tenure.

“When their tenure was about elapsing, the chairmen returned to court to demand a three-year term in office. But on March 23, 2016, which was a day to the end of their two years in office, the court ruled against their request for a three-year tenure.

“The court said the chairmen must vacate on March 24, with a restraining order that the governor must not appoint any director of Administration or secretary to Local Government as chairman.

“Although the court directed that only an elected government must be in place, I cannot conduct election in 24 hours.

“So, I was left with no option than to invoke the Doctrine of Necessity by appointing sole administrators.

“I informed the Assembly that by virtue of the court order, I decided on a make-shift arrangement not to create a vacuum and crisis at the local government level.

“I wrote the Assembly, but I was not looking for permission. If I asked them for permission, I will be violating the court order”.

Al-Makura added: “While the arrangement was on, six members, whom they alleged have interest in the leadership of some councils, resorted to protest on the floor of the Assembly.

“A lot of people are missing the point; I have no problem with Nasarawa House of Assembly. As a father of all, I will call them for reconciliation”.

He, however, warned against acts of brigandage by any person or group.

In response to a question when the council poll will hold, Al-Makura said: “I think may be in six months.

“There are certain statutory regulations and financial implications to determine the conduct of the poll. We are looking at the next six months for the poll”.