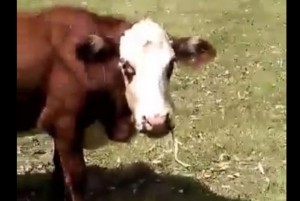 A cow on an Australian farm was caught on video enjoying an unusual snack — a green tree snake.

Janet and Shane Buchanan of Maroondan, Queensland, said their cow, Ginger, initially appeared to be eating a green piece of rope when they spotted her eating an unknown object recently.

The couple said a closer look revealed the cow’s savory snack was actually a green tree snake that appeared to be dead.

The Buchanans captured video of the unusual spectacle. Green tree snakes are non-venomous, a fact that will hopefully help Ginger avoid complications from cheating on her omnivorous diet.