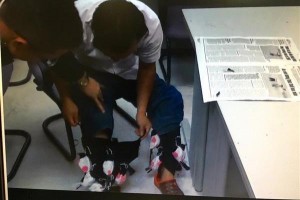 Customs agents at a Vietnamese airport said a man was hiding 18 live songbirds in his pant legs and checked bags in an attempt to smuggle them to Taiwan.

Agents with the Customs department at Tan Son Nhat International Airport in Ho Chi Minh City announced the man was searched Tuesday at the airport when suspicious items were detected inside his checked bag. Investigators said the man had devised special pouches for the live avians, which he had concealed in the legs of his baggy pants and his checked baggage.

The Institute of Tropical Biology was consulted and determined 11 of the 18 songbirds were from endangered species including white-rumped shamas, oriental shamas and melodious laughingthrush. The Vietnamese suspect was allegedly attempting to transport the birds to Taiwan. The investigation is ongoing.