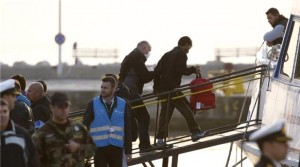 Under tight security, police on the Greek island of Lesbos have put people on boats bound for Turkey, the first to be deported under a European Union plan to stem the flow of refugees to Europe. Witnesses reported seeing two boats set sail after police boarded people who had arrived on buses.

“All of the migrants returned are from Pakistan, except for two migrants from Syria who returned voluntarily,” Giorgos Kyritsis, a spokesman for a government refugee crisis committee, told state TV. Kyritsis said 136 people were deported from Lesbos and 66 from the nearby island of Chios, where riot police clashed with local residents hours earlier during a protest against the expulsions.

The deal to send people back across the Aegean Sea has been fiercely criticised by rights groups on ethical grounds.  The AFP news agency on Monday said two Turkish ferries on Lesbos, and another one on Chios, were to pick up the refugees and that they would be escorted by police from the EU border agency Frontex. Turkish Interior Minister Efkan Ala has said his country is ready to receive 500 refugees on Monday and Greek authorities have provided 400 names, although these numbers could change.

The European Union signed the deal with Turkey in March as it wrestled with the continent’s worst refugee crisis since World War II, with more than one million people arriving last year. Under the agreement, designed to halt new arrivals along the most popular route through Turkey, all “irregular migrants” arriving since March 20 face being sent back. Each case is meant to be examined individually.