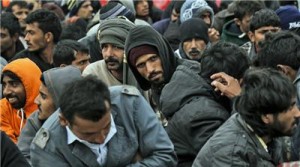 An enormous and complex logistical operation involving thousands of EU and other officials was launched to ship migrants and refugees from Greece back to Turkey under a controversial accord between Brussels and Ankara. In the first wave of deportations on Monday, around 200 mostly economic migrants from Pakistan, Bangladesh and Afghanistan were sent back to Turkey aboard chartered Turkish ferries sailing from the Greek islands of Lesbos and Chios.

Under the hard-won deal with Ankara, the European Union accepted that for every refugee from war-ravaged Syria being returned to Turkey from Greek islands, another Syrian refugee will be resettled directly from Turkey to the EU. While the operation ran smoothly on the first day, human rights groups feared for the future of asylum seekers.

Many worried that Greece was overwhelmed with potential asylum seekers, and that authorities did not have the resources to process their applications – meaning that some refugees would be deported without exercising their right to apply for refuge.

“There are many questions over the legality of this deal in large part because we have little information as to whether or not people have a fair chance of having their asylum claims assessed. This [deportation process] appears to have been fast-tracked,” Brad Blitz, who researches migration in the southern Mediterranean at Middlesex University, told Al Jazeera.

“Some [migrants and refugees] did leave voluntarily. The first two boats [on Monday] contained principally Pakistani migrants. The third boat contained Afghans.” He added that migrants and refugees from South Asia were more likely to face return at the initial stage of the operation, as opposed to those fleeing war-ravaged countries such as Syrians.