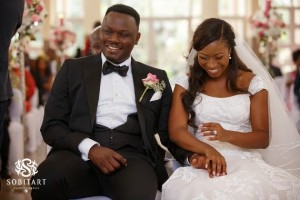 Famous Mavin singer, Sidney Esiri aka Dr. Sid, has opened up on his career and marriage in this interview with Sunday spice.

The video of the single Surulere, was quite unique. What were you trying to achieve with the concept?

I was simply trying my hand at acting. I had already shot a film with Moses Inwang, titled The Last Six Digits. So, with Surulere, I wanted a fun video. Frank Donga and I were the lead actors and Donga’s facial expressions were spot on and hilarious. I call him the Nigerian Frank Spencer. We both came up with the concept and I planned for Oba Saheed Elegushi to play a cameo role in the video but it wasn’t possible.

You seem to have an inclination for dance songs…
My last album had a variety of songs like Chop Ogbonna and Surulere. I like to get my audience involved in my stage performances. I intend to direct more videos and that was why I attended a film school in order to pursue my passion in filmmaking. I also have a short film, which I released on YouTube. My goal is to make movies that will keep you on the edge of your seat.

Do you think you have gotten to the stage where you can leave music for video directing?
Both industries are intertwined which means that I can make music and also come up with a creative concept for the video during my spare time.

Some say your songs sound alike. Do you agree?
I don’t think my songs sound alike. Baby Tornado sounds completely different from Surulere. I think people need to change the way they listen to my songs. The only thing I think is peculiar to my songs is that I like songs people can sing along to. I have been in this industry for 13 years and I have studied the market to an extent. A friend recently drew my attention to the fact that the only musicians who started out at about the same time I launched my music career are Sound Sultan and 2face. I was stunned and it means that I must be doing something right to still be around till date. I must thank the fans who have taken out time to listen to and understand my sound. I constantly try to improve on my sound and craft. My happiest moments are when I am performing on stage.

You’ve been around for over a decade. Are you happy with where you are now?
I don’t regret any stage I find myself in life. Some people might say I am not as big as I am supposed to be but that’s their opinion. God has his plans for me and every step I take brings me closer to fulfilling my destiny. I could have been more aggressive with my career and fade off like a lot of artistes but I’m still here 13 years on. I can’t really complain about that because I make enough money to feed my family and invest in other businesses. I am not greedy but content with life.

Your industry is quite competitive, how do you handle that aspect?
I will give my late dad and my mum the credit because they raised me well. There is a popular saying that “you don’t have look at someone else’s watch to look at your time.” I’m not envious of anyone. As a matter of fact, what makes you a success is what you do with your achievements. Not many are aware of the fact that how you comport yourself helps to determine your personality and shapes your future. My dad thought me to strive for perfection but he also told me that consistency is what keeps you relevant. That is one of the reasons why I keep putting out good music.

In what ways does your family plan to immortalise him?
To be honest, my father is already immortalised through the way we live our lives. I have a family name to protect and I also want to be known as Justus Esiri’s son. He is being remembered and celebrated through my actions. I am a representation of his legacy and I can’t reveal what my family’s plans are in this area. Irrespective of what comes my way, I always remember that I have a name and pedigree to protect.

Has being his son put you under so much pressure especially from his fans?
Yes, it has and right from the outset of my music career, I was committed to building my own name and brand. I didn’t want to ride on the fact that I am Justus Esiri’s son. Till date, some people still don’t know that I am his son. This is good for me because it made me realise that all I have achieved in my career is by merit and not because of my father’s name. I would also be lying if I say that my father’s name didn’t open certain doors and make certain things easier for me. I have attained a certain level of contentment, so I don’t need to prove myself to any one.

Do you have an album in the works?
Unfortunately, the cycle of music release has changed worldwide. People aren’t really buying into albums that much because the moment you drop an album this week, people will begin to ask you when the next one will follow. People have started consuming music a lot and you need to give them constant quality content. I released so any songs on my last album, Siduction, so all I have to do is promote the album throughout the year. Right now, I am thinking of releasing a few singles and when the time is right I just might drop an album.

How would you describe your marriage so far?
Marriage is the hardest and best thing I have ever done. I have learnt how to adapt and connect more with my wife. I thank God that I have such a beautiful wife who is understanding, loving and caring. She loves me more than I love myself and constantly encourages me to be better.

How involved are you in the nurturing of your daughter?
My wife took some time away from work to raise our daughter. After our wedding, she was supposed to start her business but she became pregnant and had to adjust to her new role as a wife and mother. Now that she is back to work, I have taken up the daddy role, which includes changing diapers and caring for our daughter at odd hours. I am extremely happy and I have never felt this way before. A lot of people hear about marriage and think it is hard. It can be beautiful if you work towards it. I remember us quarrelling two days before our wedding and even threatening to pull out. But, our love for each other has kept us going. Right now, our marriage is on autopilot and we are just cruising because we understand each other absolutely.