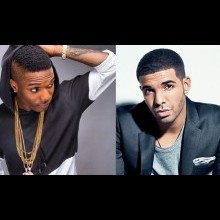 Multi-platinum recording artist Drake, who is also the OVO boss, has released two new singles featuring the finest of international stars including Jay-Z, Kanye West and Nigeria’s own Starboy, Wizkid.

In the words of The Verge:

The two new singles: “One Dance” featuring Wizkid & Kyla and “Pop Style” featuring The Throne aka Jay Z and Kanye West, his second and third single off his upcoming album Views from The 6. The singles follows up “Summer Sixteen,” which Drake premiered back in January on his Beats 1 show OVO Sound Radio.

“One Dance” follows in the Dancehall footsteps of Drake’s number one single “Work” with Rihanna, and features Wizkid, one of Nigeria’s biggest artists. The features on the two follow-up singles to “Summer Sixteen” make it clear that Drake is looking to dominate the summer with Views From The 6, and won’t leave it to chance.