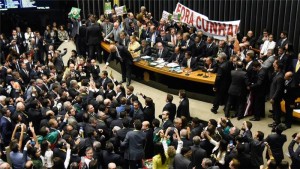 Brazilian legislators have voted in favour of impeaching President Dilma Rousseff after a contest that has deeply divided the country and could end more than a decade of left-wing rule. Tens of thousands of pro and anti-impeachment protesters gathered in the capital Brasilia and other cities to watch the dramatic vote, which was shown live on national television on Sunday.

The impeachment motion will now go to the Senate which will vote, probably in May, on whether to open a trial.  If the Senate votes by a simple majority to go ahead with the impeachment, Rousseff, 68, would be suspended from her post and be replaced by Vice President Michel Temer as acting president, pending a trial. Temer would serve out Rousseff’s term until 2018 if she were found guilty.

The impeachment battle, which comes during Brazil’s worst recession since the 1930s, has divided the country of 200 million people more deeply than at any time since the end of its military dictatorship in 1985.

The 513 legislators voted one by one, all of them given 30 seconds to speak before casting their ballots. The floor of the lower house was a sea of Brazilian flags and pumping fists as dozens of MPs carried the deputy who cast the decisive 342nd vote – needed for impeachment to succeed – in their arms.