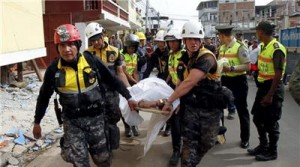 With a death toll that continues to rise – now standing at 413 – Ecuadorean President Rafael Correa has said rebuilding the country will cost billions of dollars and may inflict a “huge” toll on the economy. Two days after the magnitude 7.8 quake, traumatised survivors begged Correa for water in the city of Portoviejo, while a soccer stadium in the beach town of Pedernales served as a makeshift relief centre and morgue.

Afraid of staying indoors, or with no home to go back to, families huddled in the streets, while police and soldiers patrolled in an effort to control looting. Seeing the devastation first hand, a visibly moved and grim-faced Correa warned that Ecuador’s biggest disaster in decades would put a big toll on the poor Andean country of 16 million people.

Relief workers were confronted with swaths of flattened homes, roads and bridges as they surveyed the destruction wrought by Saturday night’s quake, and the death toll was expected to rise. “Reconstruction will cost billions of dollars,” said Correa in Portoviejo, where survivors swarmed round him asking for aid. The economic impact “could be huge,” he added later.

Michael Henderson, at risk consultancy Maplecroft, told Reuters news agency that Ecuador was less well equipped to recover than Chile, where a 2010 earthquake caused an estimated $30bn in damage. The quake struck on Saturday night along the northwest coast, while Correa was in Italy. Vice President Jorge Glas – a potential candidate to succeed Correa in the elections next February – flew into the disaster zone within hours to oversee rescue and relief efforts.