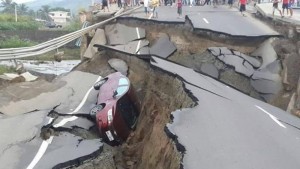 Ecuador’s President Rafael Correa has warned that the death toll from a powerful earthquake which has killed more than 250 people is likely to rise. President Correa has dishonoured his itinerary to visit some of the people affected as he postpones a visit to Rome.

He also said that evidence suggested that people were still alive under the rubble of collapsed buildings.

At least 272 people are confirmed dead and more than 1,500 hurt by the quake, Ecuador’s most powerful in decades. A state of emergency has been declared and some 10,000 troops and 3,500 police have been deployed in the affected areas, with an emphasis on finding survivors.

“I fear that figure will go up because we keep on removing rubble,” a shaken Mr Correa said in a televised address. “There are signs of life in the rubble, and that is being prioritised.” The magnitude-7.8 quake struck on Saturday evening. Coastal areas in the north-west were closest to the epicentre.

The quake is Ecuador’s largest since 1979. More than 130 aftershocks have followed. The US Geological Survey said the earthquake struck at a fairly shallow depth of 19.2km (11.9 miles), about 27km from Muisne in a sparsely populated area. The quake was also felt in neighbouring Colombia.