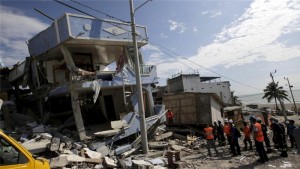 Ecuadorians started burying loved ones who died in the country’s worst earthquake for decades as hopes faded that more survivors will be found. In the small town of Montecristi, near the city of Manta, two children were among those buried on Tuesday. They were killed with their mother while buying school supplies when the magnitude-7.8 quake struck on Saturday night.

The funeral had to be held outside, under a makeshift awning, because the town’s Roman Catholic church was unsafe due to structural damage.

Family members wailed loudly and one man fainted as the children were laid to rest in an above-ground vault. The scenes of mourning were replicated along the normally placid Pacific coastline, where towns were flattened and hundreds killed. Funeral homes were running out of coffins for the dead, and local governments were paying to bring them in from other cities.

The government put the death toll at 507 late on Tuesday, of whom 499 have been identified, according to the Attorney General’s office.  Yet, officials expected more bodies to be found, with the Defence Ministry reporting that 231 people were still missing. The final toll could surpass those from earthquakes in Chile and Peru in the past decade.