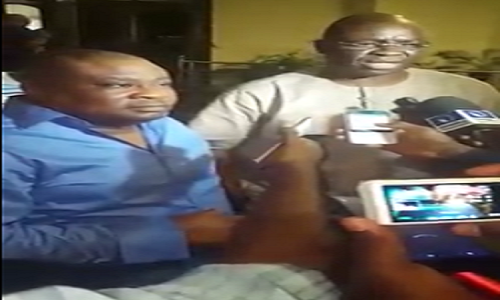 Former Secretary of the Peoples Democratic Party, PDP, in Ekiti State, Dr. Tope Aluko, who exposed details of the alleged rigging of the 2014 governorship election in the state, has denied the reported reconciliation between him and Governor Ayodele Fayose.

In a highly publicized truce held in Lagos on Sunday, Aluko, who has a warrant for his arrest obtained by the Ekiti State Government from an Ado-Ekiti Chief Magistrate’s Court, was seen standing beside Governor Fayose as he addressed a press briefing saying they had buried their differences.

But the former Ekiti PDP scribe, who described the reconciliation between him and Fayose as a “joke of the Century”, insisted that he never begged for forgiveness from the governor as being peddled in some quarters.

He accused the Special Assistant on Public Communications and New Media to the Governor, Lere Olayinka of “hypocrisy, distortion of facts and spreading lies” on the “reconciliation process”.

Addressing a press conference yesterday in Lagos, Aluko said he was under duress to admit to a reconciliation, which was aimed at tarnishing his integrity.

According to him, he went to Eko Hotel, Victoria Island, Lagos on Sunday to honour an invitation by the PDP leadership to address some issues affecting the state.

Aluko said he went to the meeting with his wife but was shocked to see Governor Fayose walk into the meeting.

He said: “I need not recall the drama and face-off that ensued between Fayose and I at the meeting. At a point, my wife barged into the meeting to inform me of the presence of reporters.

“I became enraged and decided to leave the place but I noticed the governor rushing after me downstairs in a Gestapo manner.

“My wife was fidgeting and almost crying and suddenly I could not find her around me. I realised that I need to obey Fayose’s instruction to face the press because of my family’s safety”.

Aluko said he still stand by his words on the alleged rigging of the Ekiti governorship elections.

“I have earlier told Nigerians about the manipulation of the 2014 governorship election and I still stand by all I said.

“You will notice the several counter allegations by Fayose and his media team that none of them has refuted all I have said. Rather the attack has been on the messenger and not the message. I will like to apologise to Nigerians that perhaps, accepting the invitation was a tactical error.

“I will also like you to know that I am dealing with a master fraudster who is always full of mischief. You will all recollect how he announced the purported death of Afolabi Akanni; the purported arrest of four members of the House of Assembly.

“I need to emphasise that all that transpired at Eko Hotel on that day was an organised propaganda/drama to stain my image and malign my personal integrity and I believe it would be a good script for Nollywood”, he said.

Aluko declared that the battle line between him and Fayose is now drawn and will continue until there is a victor and a vanquished.

He said: “I did not beg Fayose, he approached me and it was courteous that I honored Ekiti leaders who wanted peace to reign in Ekiti, contrary to the lies being spread by Fayose’s mouthpiece Lere Olayinka.

“I have come forward in strong terms to rubbish Olayinka’s hypocrisy with his distortion of facts about the reconciliation process. The spread of lies about my ‘repentance’ is calculated.

“Fayose and his paid agents are cowards who only want sympathy through the back door. Their pranks can only be described as ‘the joke of the century’.

“I know Fayose well. He is a chameleon and I also know that he must have devised all these arrangements to further assassinate my character and that was why I was meticulous by not speaking to the press.

“Like I said on Monday, I won’t dignify Olayinka with a response and I won’t join issues with him but the public should know that it was peace they claim they wanted and now that they have indicated their insincerity, it therefore means the battle continues until there is a victor and a vanquished”.