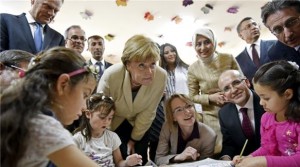 European leaders say a new deal with Turkey to stop refugees and migrants from making dangerous journeys is working. German Chancellor Angela Merkel and EU officials visited a refugee camp in southeastern Turkey on Saturday in an attempt to bolster the controversial deal.

Merkel, accompanied by Donald Tusk, EU president, and Frans Timmermans, European Commission vice president, visited a camp in Nizip – near the Syrian border – to inaugurate an EU-funded project in support of Syrian children and hold talks with Ahmet Davutoglu, Turkish prime minister. Tusk praised Davutoglu and his government, saying his visit to the camp had shown him that Turkey “is an example for the whole world on how we should treat refugees”. Tusk said the EU will spend €1bn ($1.1bn) this summer on projects to improve the lives of Syrian refugees.

The media were not allowed into the Nizip camp to talk to refugees. But speaking to Al Jazeera through the fence, Syrians asked if they wanted to stay there or go to Europe responded with one word: Leave. In a deal agreed to last month, the 28-member EU is offering Turkey a package of incentives – from billions in refugee aid to progress on visa-free access to the bloc for Turkish citizens – in exchange for help in returning refugees.

Turkey, with 2.7 million registered Syrian refugees, is host to the largest number of refugees in the world. About 280,000 of them live in camps.  Praised by Merkel and EU leaders but called inhumane by critics, the deal is aimed at discouraging people smuggling via treacherous sea routes by cutting off the main migration trail from the Middle East to Europe. “Our goal is not only to stop illegal migration, but for refugees to have more opportunities near their home,” Merkel said at Gaziantep University.