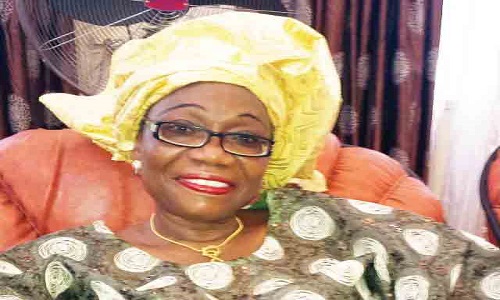 The Ogun State Police Command has confirmed the abduction of a former Minister of State for Education, Iyabo Anisulowo.
Mrs. Anisulowo was abducted late Wednesday in Ilaro, Yewa South local government area of Ogun State, police said.
The State Police Public Relations Officer, Muyiwa Adejobi, confirmed the abduction in a statement last night.
He said the Police Commissioner, Abdulmajid Ali, had deployed five teams to rescue the former minister.
Mrs. Ashimolowo was Minister of State for Education under the military regime of late Sani Abacha. She later became a senator representing Ogun West Senatorial District.
”The Ogun State police command is aware of the kidnapping of Senator Iyabo Anisulowo in Ilaro area today around 6pm. The Commissioner of Police Ogun State CP Abdulmajid Ali has detailed five teams to the area to rescue her unhurt”, Mr. Adejobi, a Deputy Superintendent of Police, DSP, said in a statement.
“The special Anti-Robbery Squad SARS, and Anti-Kidnapping Squad Commanders have been sent to the area by the CP to rescue the senator and apprehend the perpetrators. We have also embarked on scientific investigation of the matter”, he said.
The command, however, gave assurance that Anisulowo, a one-time governorship candidate in Ogun State, would be rescued, with a call on residents of the state to give adequate support to the authority.
“We therefore assure the general public particularly the good people and Government of Ogun State that the kidnapped victim will be rescued very soon unhurt. We appeal to Nigerians and people of Ogun State to support the police command with useful information to assist the police”, Mr. Adejobi said.