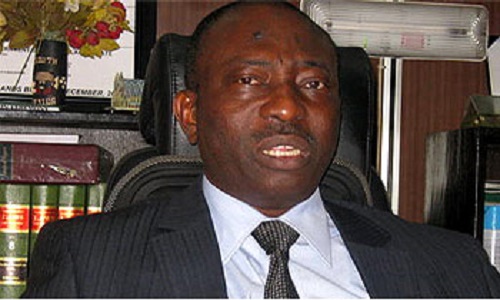 A former Solicitor-General for Lagos State, Mr. Lawal Pedro (SAN), has denied involvement in a $10 million professional fee scam rocking the law firm of legal luminary, Chief Afe Babalola (SAN).
Babalola’s firm had in a petition forwarded to the Independent Corrupt Practices and other Related Offences Commission, ICPC, alleged Pedro’s involvement in the fraud, which was in respect of a land case won for the Gbadamosi Eletu Family of Lagos at the Supreme Court.
The Eletu family had denied signatory to the $10 million professional fees allegedly charged by Babalola’s firm.
Pedro, who was the Solicitor General of Lagos State at the time the land case was decided at the apex court, said: “My role in the whole case was largely misconstrued and l wish to state with emphasis that l did not, and could not have defrauded Chief Afe Babalola (SAN) or his law firm of $10 million.
“The allegation is false and malicious. I wish to state that Chief Afe Babalola’s petition to the ICPC, which I have read and responded to accordingly, was as a result of his misunderstanding of my role in the settlement of the Supreme Court judgment in favour of his client (The Gbadamosi Eletu family of Lagos) in Suit SC/146/05”.
He further stated: “On the 13th of March, 2016, I was with Chief Afe Babalola in Ado Ekiti to resolve the misunderstanding and we have been relating since then.
“Even though the non-execution of the judgment delayed the immediate payment of Chief Afe Babalola’s professional fees by his client, I acted in the best interest of all the concerned parties to achieve a resolution of the matter.
“As regards Chief Babalola’s professional fees, it is a matter between him and his clients (The Gbadamosi Eletu Family of Lagos), which I am aware is already a subject of a pending case, which all parties are trying to resolve in suit LD/182LWM/15”.