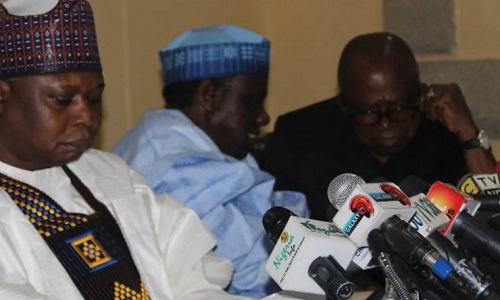 The forum of ex-ministers in the Peoples Democratic Party, PDP, have advised the leadership of the party to adhere to the wishes of its members in the zoning and other arrangements ahead of the May 21 national convention slated for Port Harcourt, Rivers State.
Addressing journalists after a meeting that lasted for about five hours at the NICON Luxury Hotel, Abuja, the Chairman of the forum and former Minister of Special Duties, Mr Tanimu Turaki (SAN), expressed concerns over arrangements for the convention including the zoning arrangements.
Mr. Turaki warned that if the convention is not conducted credibly and zoning arrangements done to reflect the wishes of members, the party could head for serious crisis.
“We considered extensively and reaffirmed our earlier position regarding the leadership of the party on the principle that while the minority will have their say, the majority will quite understandably have their way.
“The forum reiterates its stand that the party’s leadership should conduct transparent and credible congresses and national convention.
“We have also recognized serious concerns over the arrangements and (are) unequivocal that should the convention not produce officers of the party that reflect the will of the people, it will portend continued disaster for the party in popular national elections”, he said.
Mr. Turaki also said contrary to speculations in some quarters, the zoning committee of the party has not zoned any of the National Working Committee offices to any geo-political zone.