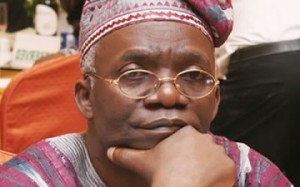 Popular human rights lawyer and father to the fast rising rapper, Falz, Femi Falana, SAN, and colleague, Jiti Ogunye, celebrate Fela at an exhibition as a true icon whose voice echoed across the consciousness of human rights.

The exhibition organised by artist and architect, Baba Oladeji, had the duo at the Kongi Harvest Gallery in Freedom Park, Lagos for the Fela Memorial Force HQ exhibition to further protrude the course of the legendary afrobeat singer as Falana spoke on the topic, ‘A leftist Police Force via progress in the administration of criminal justice.’

Falana reminiscences as he pitches his speech with popular songs of Fela, while also drawing from some of the milestone judgments he won for human rights agitation championed by Fela.

Oladeji, while indulging the audience said the exhibition was to awaken politically the evolution of reality and hail people triumphing over the forces of oppression.He also called for the works to be seen as ways to visually explore the untapped potential in the radical Administration of Criminal Justice Law ACJL (2007) by the Lagos State Government.

Performances from singers such as Nneka, Waje and the Anikulapo-Kuti clan of Femi and Seun including Fela’s evergreen songs thrilled the audience.

According to Oladeji, the Fela Memorial Force HQ Exhibition will tour five cities that reconstruct the context of Fela’s works: from birth, radicalisation to death.

The cities to be toured are Abeokuta, London, Los Angeles, Accra and Lagos in October during the yearly Felabration; a musical festival in Lagos.