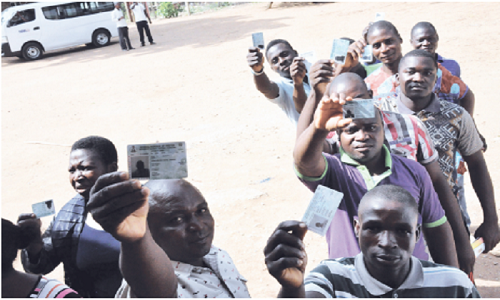 The Transition Monitoring Group (TMG) has said that yesterday’s Federal Capital Territory (FCT) area councils’ elections was rife with vote buying with residents selling their votes for a low as N200.
A preliminary statement of the elections signed by the group’s spokesman Armsfree Ajanaku, also said that the city centre witnessed voter apathy leading to low turnout compared to the rural areas that recorded high volume of voters, especially elderly women.
The TMG said observers reported that officials of the Independent National Electoral Commission (INEC) largely arrived on time with sensitive and non-sensitive materials for the commencement of the simultaneous processes of accreditation and voting at 8am and that in most Polling Units (PUs) in the city centre and in the outskirts, the processes of accreditation were underway in most places at 9am.
The report said the card readers read most of the Permanent Voter’s Cards (PVCs) in the observed PUs but that in many instances, finger print authentication failed.
It said voters were, however, not disenfranchised as they used the incident forms.
On security, the TMG statement noted a healthy presence of security in most of the PUs but noted an unusually heavy presence of a combined security team of soldiers of the Nigerian Army and regular policemen at PU 003 at Dangara Kwali Ward 01.
“In PUs in areas around the city-centre, TMG observers reported low turnout of voters. Early voter turnout was also low in some PUs in AMAC when compared to Bwari, Karu and Kuje where voters turned out was massive and early. Turnout was sizeable and a lot more enthusiastic in areas Area Councils like Kwali, Gwagwalada, Abaji, Bwari and Kuje”, the report said.